The great nutty flavor you expect from Genmaicha combined with a dusting of matcha adding to the complexity and producing a slightly darker liquor color.

Genmaicha, also known as Gen Mai Cha or Brown Rice Tea features roasted rice, some of which pops during the roasting process with the appearance of popcorn.  This tea is widely consumed in Japan, having been developed with rice as a filler to cut the volume of tea which kept the price down and affordable to all. Matcha infused Genmaicha is one of many great Japanese tea varieties.

A uniquely Japanese tea is genmaicha (also known as Gen Mai Cha or Popcorn Tea). This tea is produced by blending Genmai, or brown rice, with green tea (cha). The result is a delicious nutty taste. Genmaicha can be produced using a base of sencha, bancha, or other Japanese green tea although it is traditionally produced with a bancha base. The addition of brown rice to bancha green tea tended to lower the cost making it a commonly consumed tea in Japan. 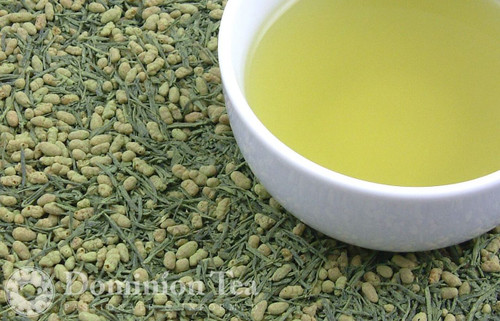