A product of the Shizuoka prefecture of Japan, this is a traditional Japanese tea. Genmaicha Organic is made with larger leaves, bits of stem, and rice kernels to produce an infused liquor with a toasted, almost buttery, aroma and flavor.

Genmaicha, also known as Genmai Cha or Brown Rice Tea features roasted rice, some of which pops during the roasting process with the appearance of popcorn. This tea is widely consumed in Japan, having been developed with rice as a filler to cut the volume of tea which kept the price down and affordable to all. Genmaicha is one of many great Japanese tea varieties.

Also known as Popcorn Tea or Genmai Cha, genmaicha is a blend of genmai (brown rice) and green tea (cha). It can be produced with any number of green teas as a base though bancha and to some degree sencha being the most common.

Our Genmaicha Organic Green Tea comes from a Globally Important Agricultural Heritage System (GIAHS) as recognized by the United Nations Food and Agricultural Organization (FAO). The distinction is due, in large part, to the practice of Chagusaba or "tea grass fields" used in the production of this tea. The Chagusaba method uses native grasses of the Shizuoka Prefecture, cut and spread around tea bushes to reduce weeds and fertilize the plants. The method provides a sustainable method which also enhances the flavor of our Genmaicha Organic. 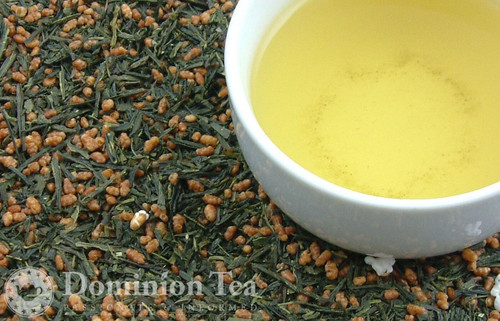