Brilliant green color with a mild, natural sweetness. Our Ceremonial Matcha Green Tea is produced from handpicked leaf, ground by granite stones into fine powder to produce this green powder tea. Produced in Nishio City in Aichi Prefecture, Japan. Matcha green tea is one of many great Japanese tea varieties.

Matcha green tea is actually a powder produced by milling green tea leaves. Matcha tea powder production dates back as far as CE 600 when tea was transported in brick form. Traditionally used for Chado, or the Japanese Tea Ceremony, matcha green tea powder is now used widely for bottled drinks, home cooking, and by many restaurants. It is generally produced from gyokuro leaves, which have been hand-picked, and features a distinctive bright green appearance. There are many grades of matcha tea depending on the base tea used in production, and cooking grades tend to impart a stronger flavor, thus using ceremonial grades in cooking is not necessarily better. A more recent use for matcha powder is found in matcha infused sencha and matcha infused genmaicha which build a layer of complexity and flavor on these two well-known Japanese teas. To prepare matcha on its own involves vigorous whisking of the matcha powder in a bowl until frothy and then adding water if necessary to taste.

Step 1:
Place ½ tsp in a bowl and add 3 oz of hot water (180°).
Step 2:
Whisk with bamboo whisk or hand mixer until smooth and frothy.
Step 3:
Add additional water to taste as desired. 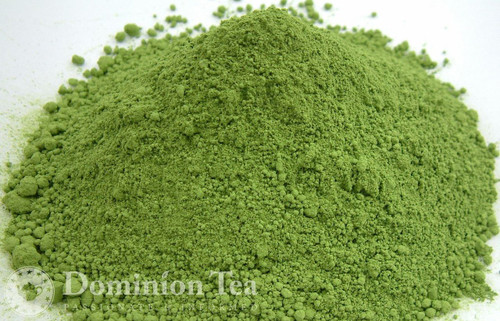