This 1st Pre-Qingming Dragon Well green tea comes from the original province to produce Dragon Well, Zhejiang China.  Very well known yet hard to find outside of China this tea features hand flattened yellow-green leaves. It has both a sweet and grassy flavor that is complex and subtle. This is a true connoisseur's tea.

Longjing, or Dragonwell Tea, is China’s most famous green tea. This tea is so prized in China that a pre-market release sale of Dragon Well green tea in May of 2012, resulted in 500 grams of the tea selling for 180,000 Yuan or $28,499. On a per gram basis, it was purchased at a rate higher than gold was trading that day. On a per cup basis that is $171 per 8 oz of liquor, which is on equivalent to some of the more famous wines. Tea purchased at this rate usually remains in China and exchanged between business men and politicians as gifts.

The name, Dragon Well, comes from Chinese mythology where a village in China was suffering from a severe drought and was advised to pray to the benevolent dragon who lived in the nearby well to bring rain. The rain came and the village in appreciation renamed itself and its tea to Dragonwell. Authentic Longjing or Dragonwell is produced in Zhejiang providence outside of the fifth largest Chinese city of Hangzhou. The area is also referred to as Xi Hu or the West Lake region and is home to several UNESCO sites, as well as tea plantations. Due to the popularity of Dragon Well Tea, the Chinese government expanded the region they claim as home to authentic Dragonwell to all of Zhejiang province. Originally it was only produced in a 65 square mile area of Xi Hu, made up of four regions – Lion Mountain (Shifeng), the center of the original Dragon Well tea growing area, Mei Jia Wu (Mei family valley), Long Jing and Lin Yin Temple areas. Given the popularity and relatively high price at sale, there are many counterfeit Dragonwell teas on the market, so knowing how the characteristics of the authentic tea is important.

Authentic Longjing is harvested by hand and then pan fried to stop the oxidation process. High quality Longjing tea will be have uniform tight, flat lime to dark green dried leaves. The steeped leaves will appear plump with a uniform light green color. Lower quality Dragonwell leaves will turn bluish green to dark green in color after steeping. The tea liquor should be a bright clear jade yellow. This tea is best when brewed between 167-176 degrees Fahrenheit. The North American Tea Championship definition describes the liquor of Dragon Well green tea as having a gentle smell of fruitiness with mellow plant notes. In the mouth, the liquor should have a light-bodied, buttery and smooth feel with slight astringency and hints of peas and sweet-corn with husk and a nutty finish.

Step 1:
Add boiling water to mug and allow the water to cool to 170°-185° or simply wait 2-5 minutes.
Step 2:
Steep 1 heaping Tbsp or 3-4 grams of tea per 8 oz of water.
Step 3:
Steep for 3-5 minutes. Green teas often have substantially different character depending on the time and temperature used for steeping so experiment with water throughout the range. Try 2-3 steepings. Great candidate for cold brewing. 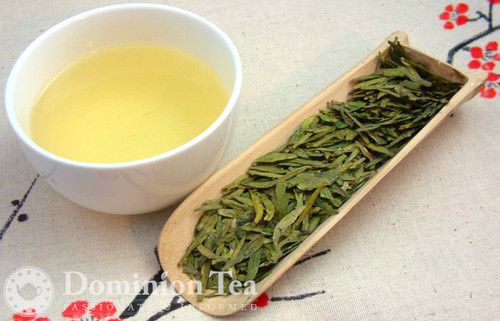