Huang Shan Mao Feng is one of the most famous green teas of China.  Produced from two leaves and a bud, this tea has a silky cream color liquor with a slightly grassy aroma.  The infused liquor has moderate astringency, hints of spice, and you may even find a touch of anise or licorice taste.  This very fresh tasting tea is an excellent specimen.

Huang Shan Mao Feng, also known as Huangshan Maofeng, comes from the southeastern part of Anhui province in China on the Eastern part of China near Shanghai. The literal English translation is Yellow Mountain Fur Peak and legend tells of a young girl who would not marry her true love and found he had been killed by the man who would claim her for his own. Her tears over his grave became rain and his body became a tea tree.

Step 1:
Add boiling water to mug and allow the water to cool to 170°-185° or simply wait 2-5 minutes.
Step 2:
Steep 1 round Tbsp or 3-4 grams of tea per 8 oz of water.
Step 3:
Steep for 3-5 minutes. Green teas often have substantially different character depending on the time and temperature used for steeping so experiment with water throughout the range. Try 2-3 steepings. 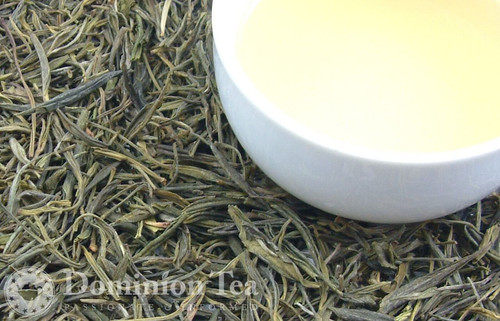