This robust organic chai is a historic favorite of India.  A smooth blend of cinnamon, ginger, cardamom, cloves and peppercorns, and large leaf organic Assam tea allows this chai to hold its own with milk and honey, as well as stand up to ice without losing its flavor.

Masala Chai has its roots in Indian culture, though exactly when seems a bit of a mystery. One account has it attributed to an Indian king some 5,000 years ago (Kasam, 2004), while the commonly accepted source is the Hindu Aurveda tradition. Regardless, spiced tea was consumed in India long before the arrival of the British and well before it was brought to the United States and commercialized.

Indian Masala Chai, like other spiced teas, can be steeped in several ways. You can, of course, steep Masala Chai straight with boiling water for 3-5 minutes just as you would any other loose leaf tea. Yet, it may be more fun to enjoy in a more traditional manner as is done in India.

To prepare in a more traditional Indian way, start with 3 tsp of our organic Masala Chai, 1 cup of water, and 1 cup of whole milk. You will also want 1 or 2 Tbsp Agave Nectar or your sweetener of choice. Bring all ingredients except sweetener to a boil in a small saucepan then quickly reduce to a simmer for 5-10 minutes. The longer you simmer the greater the intensity. Add sweetener, stir, and strain into your mug of choice. Enjoy!

Step 1:
Preheat mug with boiling water, discard and refill.
Step 2:
Steep 1 round tsp or 3-4 grams of tea per 8 oz of water.
Step 3:
Steep for 3-5 minutes as desired. Experiment with slightly cooler water or shorter steeping times. Try one additional steeping if desired. Add milk if desired. 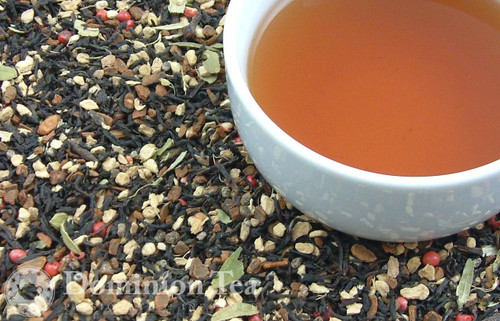