Wen Shan or Bao Zhong Oolong is a delicate oolong that has been very lightly oxidized.  The infused leaf produces a delicate tea that is a light cream color with a complex milky and floral taste.

Oolong teas are actually some of the youngest types of tea. It is believed that the Chinese started to really understand and control oxidation of tea in the 17th century, leading to the first oolong teas. Given that the first teas in China where documented over 3,000 years earlier, a few hundred years old is still young. Highly regarded Taiwanese oolongs only began to make an appearance during the 1960′s, when the Taiwanese realized they were losing market share to Chinese and Japanese teas. Taiwan needed to do something different to distinguish themselves in the marketplace. Prior to the 1960′s, Taiwan was producing mainly green teas for consumption by the Japanese.

Origin of the Oolong Name:

The name oolong literally means black dragon, which refers to the shape of the hand rolled oolong tea leaves. There are other theories that the name originates from the Wuyi Mountains in the Fujian Province of China where it is believed that the first oolong teas where made. There is an alternative theory that it is named after the man who made the first oolongs, Wu Liang, and was later corrupted to Wu Long before being anglicized into oolong. No matter where the name came from, this type of tea is worth exploring for every tea drinker.

Step 1:
Preheat mug with boiling water and wait 2-3 minutes for 195° water.
Step 2:
Steep 2 round tsp or 3-4 grams of tea per 8 oz water.
Step 3:
Steep initially for 1 minute, the second time for 20 seconds, third for 50 seconds and two minutes for each subsequent steeping for 2 minutes. 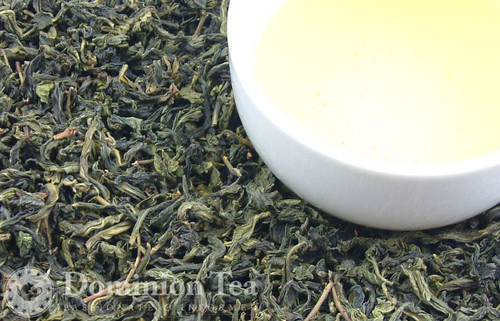