Ancient Snow Shan trees yield a white tea unlike any other, grown in Northeast Vietnam at 1,400 ft. These stem buds yield a delicately complex tea with sweet floral notes and lingering spice. They can be resteeped for over 10 times.

As this is a woody bud, it is best to use a hotter water temperature than a traditional white tea.

Vietnam is a country long steeped in surprisingly ancient tea traditions, although it is often overshadowed by such industry giants as China, Japan, and India. But unknown to many Western tea drinkers, this small country has a lot to offer when it comes to tea varieties, one of the most impressive of which are the Snow Shan teas. Named for the fine white down that can be observed upon the plucked leaves, these teas are truly unique not only for their excellent flavors, but for the special cultural significance that they hold for the people of Vietnam. Snow Shan teas are grown high in the mountains of northern Vietnam, where the country is bordered by the eastern edges of the Himalayas. Although this tea region crosses multiple provinces, the largest growth area of Snow Shan is in Ha Giang, Vietnam’s northernmost point. Throughout the country, differences in climate, geography, and terrain produce unique impacts on the tea’s terroir, which in turn leads to many variations in aroma and flavor. In Ha Giang, many of the wild tea trees from which Snow Shan is harvested are over a hundred years old (some are said to be nearly a thousand) with massive trunk sizes over a meter in diameter. A far cry from the small shrubs from which many industrially-produced teas are farmed! These ancient trees are carefully tended by the indigenous ethnic peoples of the regions in which they are grown, such as the H’mong or Dao, who carry with them many generations of Vietnamese tea tradition. Snow Shan White Tea Buds Among the subgroups of Snow Shan teas, one of the most interesting and outstanding offerings from Ha Giang are Snow Shan White Tea Buds, grown on the high mountain slopes of Mt. Chiêu Lầu Thi in the rural district of Hoàng Su Phì. Rather than plucked leaves, these woody small bundles (resembling pinecones) are actually harvested from unopened stem buds, taken from the main trunk and branches of the ancient tea trees. When infused, they release a light and delicate aroma in a pale golden liquor, with sweet floral and woody flavors leaving a lingering aftertaste of subtle spice. We are not exaggerating when we say that there is no tea anywhere in the world that can quite compare! 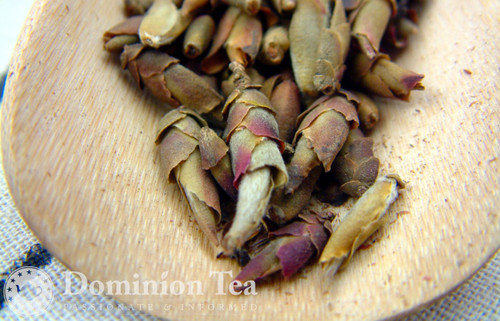