Oolong teas are actually some of the youngest types of tea. It is believed that the Chinese started to really understand and control oxidation of tea in the 17th century, leading to the first oolong teas. Highly regarded Taiwanese oolongs only began to make an appearance during the 1960′s, when the Taiwanese realized they were losing market share to Chinese and Japanese teas. Taiwan looked to create distinguished tea products as a way to complete rather than continuing to produce green teas for the Japanese market.

Oolong teas are usually produced in one of two shapes. Balled style oolongs are tightly rooled, usually with a stem tail. Open leaf style features a long curly leaf shape which can look like the dragons in Chinese mythology. Production of oolong teas is typically from older leaves on the tea plant rather than the traditional pluck of two leaves and bud. It is more common to find four leaves and a bud or what is sometimes five older leaves. 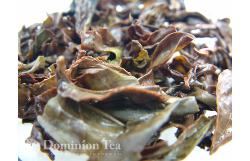 The name oolong literally means black dragon and refers to the hand rolled shape of loose oolong tea leaves, though the exact origins of the name are unknown. An alternative theory is that the name originates during the Qing Dynasty from the Wuyi Mountains in the Fujian Province of China where it is believed that the first oolong teas where made. Some even suggest that it is named after the man who made the first oolongs, Wu Liang, and was later corrupted to Wu Long before being simplified for English speakers as oolong.

Oolong teas are partially oxidized teas that can appear both black and green depending on the amount of oxidation during production. The wide range of oxidation supports an equally wide and complex range of flavors. Some oolongs are even flavored, either directly like our Summer Oolong and Pick Your Own Oolong, or rolled with ginseng and licorice powder to form small tea pellets like our Ginseng Oolong. From loose teas with a delicate taste of flowers to spicy finishing notes, oolongs provide a wonderful variety for everyone to enjoy. 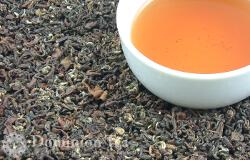 Oolong teas aren't simply the domain of Taiwan and China and are produced in a growing list of countries. Nepal, for example, is producing wider varieties of tea these days including two open leaf style oolongs. Golden Buddha and Ruby Oolong are two loose, open leaf style, Nepal oolongs which showcase what you can expect from oolong teas outside of China and Taiwan. They are high elevation grown teas from above 8,000 ft by small farmers and processed by a women owned co-op. 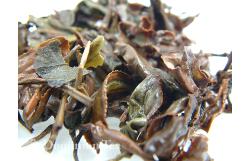 One of the most interesting oolong teas is Taiwan's Bai Hao Oolong. Also known as Oriental Beauty, this tea has a unique appearance and flavor profile which is a direct result of having been infested with leaf hoppers. These tiny insects chew on the soft tea leaves to get access to the sap and nutrients in them. In turn, the plant goes on defense, producing compounds which act as a natural bug repellent. There are two side-effects as a result. First, by chewing on the leaf, these insects cause parts of the leaves to oxidize while the leaves are still on the plant. Second, the compounds released to fend off this infestation of leaf hoppers have a different flavor profile than the tea would normally produce. Oriental Beauty oolong is known for its complex aroma of honey and stone fruits.

Oolong teas can generally be brewed with water ranging from 185-205 degrees Fahrenheit and for anywhere between 3-5 minutes. Be sure to use fresh boiled water, rather than reboiled water when making oolong (or any other tea really). These teas generally permit multiple steepings so be sure to observe how the flavor changes with each infusion. More tightly rolled oolongs like the Summer Oolong, Pick Your Own Oolong, and Ginseng Oolong, do especially well with multiple steepings. Like many other teas, cold brewing, produces tea with still more variation in flavor.