This high-grade green oolong comes from Fujian Province, China. Unlike other balled oolong teas, Ginseng Oolong is packed with ginseng powder. The densely rolled oolong slowly relaxes to infuse the tea with a mixture of flavors. As a result it is perfect for preparing with a Gaiwan where you can steep five or six times at least. Its still great when prepared western style too!

Ginseng Oolong tea yields a variety of aromas and flavors and is very aromatic and floral with hints of spice.  The licorice in our Ginseng Oolong adds a slightly sweet finish that licorice fans will love, without being overpowering. It is produced by sprinkling with ginseng and licorice root during the rolling process. Typically Ginseng Oolong is produced in both Fujian Province and Taiwan. Both regions are directly across the Taiwan Straight from each other and have historically been very close in culture, trade, and migration of tea masters.

We consider this an Adventurous tea as it's unflavored and has been a popular tea in China and Taiwan. Both regions produce excellent Ginseng Oolong though the Chinese variety tends to be a bit less expensive -- the deciding factor though is grade and there is huge variation within grades of Ginseng Oolong. This is a great tea to explore if you are looking to move beyond other oolongs and happen to enjoy green teas (though we think almost anyone will love it).

We've specially selected our Ginseng Oolong not only for the unique flavor of ginseng and licorice but because of the manufacturing process used. Like other balled oolongs this tea is rolled and folded very tightly. You will note that on the first steeping it will only begin to unfurl its leaves. Be sure to steep multiple times, noting how the large tea leaves relax with each infusion, continuing to release licorice and ginseng flavor each time. Expect at least three steeping. Be sure to use hot - around 190° water - but not boiling!

There is enormous variety among oolong teas. Many countries produce oolong teas today and the leaf style, oxidation and firing, and ultimately the flavor can vary dramatically. Oolong teas are actually some of the youngest types of tea. It is believed that the Chinese started to really understand and control oxidation of tea in the 17th century, leading to the first oolong teas. Given that the first teas in China where documented over 3,000 years earlier, a few hundred years old is still young. Highly regarded Taiwanese oolongs only began to make an appearance during the 1960′s, when the Taiwanese realized they were losing market share to Chinese and Japanese teas. Taiwan needed to do something different to distinguish themselves in the marketplace. Prior to the 1960′s, Taiwan was producing mainly green teas for consumption by the Japanese.

The name oolong literally means black dragon, which refers to the shape of the hand rolled oolong tea leaves. There are other theories that the name originates from the Wuyi Mountains in the Fujian Province of China where it is believed that the first oolong teas where made. There is an alternative theory that it is named after the man who made the first oolongs, Wu Liang, and was later corrupted to Wu Long before being anglicized into oolong. No matter where the name came from, this type of tea is worth exploring for every tea drinker.

The art of rolling tea leaves into balls came into being almost a thousand years before the partial oxidation that makes Oolong tea possible. Most modern drinkers of tea think of Oolongs when presented with balled tea leaves, but those were far from the first teas prepared in this fashion. Taiwan, which has the most famous balled Oolongs, did not apply this technique to commercial tea until well into the 1800s. Today Gunpowder Tea is not simply the domain of China as other countries, like Sri Lanka, also produce their own variations.

Step 1:
Add boiling water to mug and allow the water to cool to 190° to 195° or simply wait two minutes. Do not steep with boiling water.
Step 2:
Steep 1 flat tsp or 3-4 grams of tea per 8 oz water.
Step 3:
Steep for 2-3 minutes as desired. Experiment with cooler water or shorter steeping times. Try 2-3 steepings with slightly longer steep times for each additional steeping. 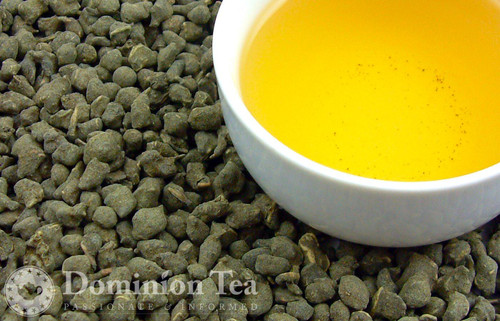