This is a great all around Assam that is great for everyday drinking.  One of the few CTC (crush-tear-curl) teas that we carry, it provides a bold malt flavor that is great to get the day started with.

The Assam region produces tea with a distinct malty taste, known for its briskness (which by the way is another way of simply saying that its taste makes you sit up and take note vs having a flat, dull, or otherwise non-memorable taste). Tea is produced in this region comes from some 600+ tea gardens and is manufactured both as CTC (crush, tear, curl) as well as orthodox or specialty tea. The sheer volume of tea produced in Assam contributes substantially to making India the second largest producer of tea after China. While known almost exclusively for its black teas, it should be noted that the Assam region of India also produces some green and white orthodox teas.

It is the terrior found in Assam, combined with the C. sinensis var. assamica variety, which produces the significantly different taste that has become so highly regarded. The leaves are larger in Assam and the nutrients in the soil lead to different taste and flavor compounds in the leaves. Whereas in China tea is often grown at higher elevations, in Assam it is grown at low elevations along floodplains with sandy, nutrient rich soils which are typical of floodplains. Also unlike tea grown in other parts of the world, it is the second flush, not the first, which is preferred. The second flush is considered to produce a sweeter liquor with a more robust full bodied taste.

CTC machines themselves are made up of large steel cylinders, manufactured with U or V shaped teeth in them, placed tightly together and turning at different rates of speed. After withering, tea is often pre-processed with a rotorvane, a machine that takes tea from a hopper and causes some initial tearing and crushing of the leaf before passing it along to the CTC machines. The tea is then crushed, torn, and twisted in passing between the steel cylinders of the CTC machine before falling onto a conveyer belt and moving along to another set of CTC rollers. This process can be repeated several times depending on the desired size of the finished product before finally moving along to be fired.

Finished product ranges in size substantially but is generally small pieces of tea leaf down to dust particles which are then rolled into small balls or pellets. The goal with CTC is generally a black tea product that oxidizes quickly and can be reliably produced with uniform size. CTC manufacturing really took off with the introduction of tea bags, thus it is not surprising today that the product of CTC manufacture is primarily for this market. Today CTC tea accounts for about 80% of the market for tea and is a significant part of production in most countries of the world. This probably should not be surprising since much of the word drinks black tea and CTC is synonymous with production of most black teas. 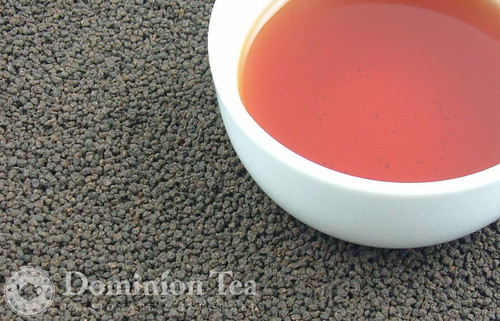