This organic Gunpowder is made from the highest grade of green tea available from Anhui Province, China.  The name "Gunpowder" comes from the pellet like appearance of the finished tea. The highest quality gunpowders have a consistent size and shape.

Gunpowder tea (also called Zhu Cha) is believed to have been first produced during the Tang dynasty (618-907 C.E.) in Zhejiang provenience of China. The withered and steamed green tea leaves were balled by hand into small pellets before being dried. Its English name came from its appearance as the tea pellets after drying look like shiny greenish-black pellets, much like gunpowder.

It is thought that the tea was balled to allow it to make the trip to the capital city, Xian, nearly 900 miles away, as something unique for the emperor, while maintaining its flavor. One of the most famous Gunpowder teas, Hui Bai, or tribute tea, was made exclusively for the emperor. It is made with small young leaves that are rolled into loose pellets that, when brewed, release a pale yellow liquor with a sweet herbal flavor.

The art of rolling tea leaves into balls came into being almost a thousand years before the partial oxidation that makes Oolong tea possible.

Step 1:
Add boiling water to mug and allow the water to cool to 170°-185° or simply wait 2-5 minutes.
Step 2:
Steep 1 round tsp or 3-4 grams of tea per 8 oz of water.
Step 3:
Steep for 3-5 minutes. Green teas often have substantially different character depending on the time and temperature used for steeping so experiment with water throughout the range. Try 2-3 steepings. Great candidate for cold brewing tea for a summer 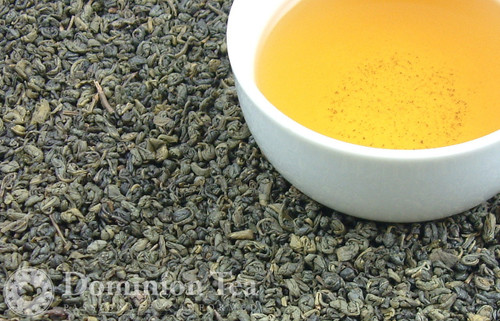