This classic, compressed style of dark tea from Yunnan Province China, has a rich history stretching back centuries when tea was pressed into bricks or cakes for transport. This shu puerh (cooked puerh) is very similar to Puerh Tuo Cha but in the shape of a square instead of the birds nest shape that is typical of tuo cha. Features a robust, soothing flavor and sweet notes of dark mocha.

Each puerh square is individually wrapped in gold foil and weighs approximately 6.5 to 7 grams.

Its often stated that the types of tea include white, yellow, green, black, oolong, and puerh (pu-erh) tea. However, this isn’t really accurate. Pu-erh is actually one variety of dark tea, albeit the most famous one. In 2008, China recognized dark tea from Yunnan as being geographically protected meaning this is the only dark tea that can be called pu-erh despite the fact that a number of other provinces produce fermented dark teas using much the same process and tea plant varieties.

Puerh tea, a type of dark tea, has deep historical roots originating in Yunnan, China thousands of years ago where it served as currency in many respects, enabling trade in goods and weapons, notably war horses from Mongolia.

For tea, much like wine, it was the necessities of transportation which led to the development of Puerh. As early as 1600 BCE the road between China and Tibet and other locations was long and arduous, travelling over treacherous, high terrain. It was used to transport goods for trade including sugar, salt, tea, horses, and of course culture and ideas. Tea became important to the people of Tibet and similarly horses became important to China for military use. Thus tea and horses were commonly traded via this road giving us the Tea-Horse Road by which it is known today. This nearly 1500 mile journey would have taken a very long time to traverse and efficient transport of goods was a must. So tea leaves began to be packaged into cakes. This packaging allowed tea to be compressed and stacked for easier transportation by both man and horse. Like wine, it was discovered that the tea actually had new flavors and aromas after the trip then at the beginning. It turns out that time in the heat and humidity during the long trip along the tea horse road substantially changed the tea resulting in something like the puerh cakes and teas enjoyed today.

Excerpt from Trade as the Mother of Invention, Dominion Tea Blog post. 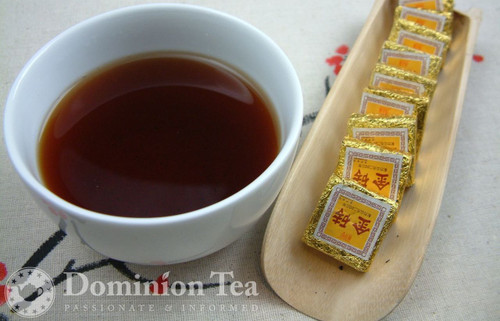