Darjeeling tea is one of the best known teas in the world. In fact it is considered distinct enough that Darjeeling tea has been awarded with Geographic Identification status recognized by the European Union. If you have had Darjeeling tea then you likely have a memory of what the tea looks and tastes like firmly embedded in your mind. But what is Darjeeling tea really? Did you know that Darjeeling is really more of a region than a style of tea?

The region of Darjeeling is actually a small portion in the most northern part of the state of West Bengal at the edge of the Himalayan Mountains and Nepal. While the region often features tea with common production methods and taste, it is as much the terrior of the region, as anything else, that results in the unique varieties of Darjeeling tea. 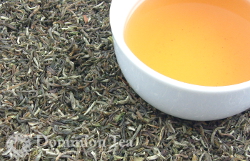 This rare Darjeeling tea was picked on the fifth day of the 2014 harvest and exemplifies a connoisseur tea. The Singell Estate 1st Flush features a very floral aroma with notes of ripe fruit.

Is one flush better than another? The reality the best tea is a matter of taste and preference. Some people want flavored or blended teas while other prefer single estate teas. The flush is nothing more than the specific crop of the season with the first flush being the first crop, the second flush being the second, and so on. 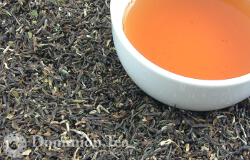 In the case of the Darjeeling region, the fist flush is harvested in mid-March. This is just after the spring rains have come through and produces tea with a lighter aroma and color, generally with mild astringency. The second flush comes from leaf harvested in June. Unlike the first flush this tea tends to be much more bold in flavor with full body and deeper amber color. It is often said to have a muscatel flavor which is defined by Merriam-Webster as "a sweet fortified wine from muscat grapes" (Merriam-Webster). Alternatively, Merriam-Webster indicates that the origin of the word is "resembling musk". Regardless of your preference, first flush tea, second flush tea, or another Darjeeling flush, don't forget that the processing style will also greatly influence the ultimate taste and appearance. 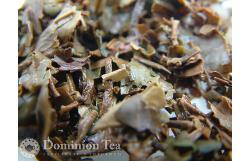 We are currently offering three different varieties of Darjeeling tea. Our First Flush Goomtee Estate comes from one of the oldest estates in Darjeeling and offers a delicate floral aroma and taste. Its an excellent starting point for those looking to compare a first flush with a second. Our Second Flush Makaibari Estate provides an excellent contrast with deeper color to the liquor, bolder flavor, and singificantly more complexity. Makaibari Estate is the oldest producer in Darjeeling. For a truly exceptional experience our connoisseur grade First Flush Singell Estate comes from a small producer and was produced on the fifth day of the first flush season of 2014. It has a wonderfully delicate taste and very floral aroma.